We are raising money with Grizzly T shirts and youth sponsorship to cover operational expenses during the COVID-19 shutdown. Follow our progress and help by sharing our campaign with people through Facebook or email.

Grizzly Cage founders Wayne Richardson and Darcy Irwin crossed paths at a local Calgary boxing club in early January of 2007. It was precisely three years later that Grizzly Cage would be incorporated.  Facing adversity is something they quickly became adept at. Prior to opening, the business was nearly destroyed. The story aired on CTV National News to view: CTV National News (click here)

Too stubborn to "throw in the towel" the fight to go forward was endured for the next 7 years.  Thanks to their families, friends, loyal members and countless volunteers (yes, including Wayne and Darcy) the club doors remained open.  The honour of being surrounded by such interesting, amazing people that have worked and trained with them over the years has made it all worthwhile.  Grizzly Cage operates with no overdraft, loans, lines of credit or credit cards. With those privileges having been lost in "Round 1" their first battle.  With the sudden announcement of the COVID - 19 government mandated closure announced, the bell for "Round 2" had rung. All memberships were suspended for the shutdown period, therefore the club will generate zero income.

First and foremost they want to fully acknowledge the threat to the lives and health of everyone affected out there. It is monstrous, so losing a business is certainly NOTHING compared to those who have or will lose their lives or those lives around them.

Some context around the campaign cover photo - presented with age (82 years young), height (4'11") and a magnificent reach disadvantage Sharp Shooter Shirley might be considered "small business" to some but she has a grizzly spirit.  Both Shirley and Don (6' 5") are part of our Grizzly Strides Boxing Program for people living with Parkinson's Disease established at Grizzly Cage in 2016.  Grizzly Strides is a Parkinson-specific “non-contact” boxing-based adaptive fitness program. Their photo depiction along with the grizzly bear, our animal namesake, capture the essence of Grizzly Cage Boxing Club.  In the face of adversity the opponent is met with ferocious inner strength, intelligence and extraordinary courage.

One recent and fitting example of how people become an integral part of the club’s community would be the story of a young boy named Gatwich.  Newly arrived in Canada he just showed up one day ready for boxing training! Unbeknownst to Darcy or Wayne he had been referred by his physician's office. They had asked him if he liked any sports and he indicated boxing. They told him about this place called Grizzly Cage. He could comprehend a lot of English but his expression was very limited.  It really didn't matter, because learning to shoot hoops, skilfully throw a football and boxing training are things that can all be learned in the absence of conversation. He qualified for KidSport funding, Darcy arranged to get that underway.  Out of pure kindness, the wait period and extension of his membership was anonymously sponsored by one of the physician's in the community. Gatwich shows up to train everyday of the week, he is always the first person there. 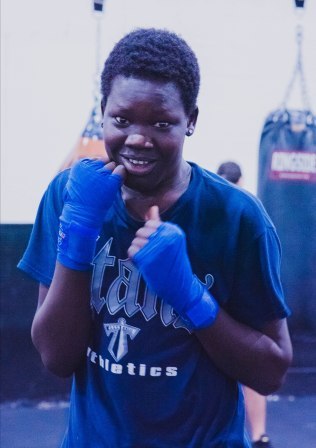 Please consider supporting the club and becoming a Grizzly Guardian by selecting one of the donation-reward levels (located to the right of this story). This type of fundraiser can be short lived or can thrive with the help of people taking time to forward the campaign to people they know through Facebook or email. There have been government loan offerings presented in the media, all of which lead to borrowing money which is not feasible given the  circumstances.

The majority of funds raised from our campaign will go towards covering operating expenses.  A smaller portion will go towards sports memberships and equipment supply designated for those youth who cannot afford it.  Please note, the youth we describe are on occasion actually young adults who have been emancipated from the foster care system and have very few supports.

Notice to Mobile/Cell Phone Users:  Your screen/donation form options are limited compared to laptop/PC, you can use your mobile if wishing to donate for single items only.  If multiple (combination of items) or quantity higher than 1, please use laptop/PC instead.

For Laptop and PC Users Use Instructions below:

Where can I view the T Shirt Designs?  At the top of this page, hover the cursor over the cover shot of "Shirley and Don" and two scroll bars will appear.  Each of the shirts has a front and a back design with the exception of the navy blue shirt with white print (front only).

How do I make a donation/receive reward of one type vs a combination? This one is simple, to the right side of this page there are boxes set up with options to choose from. Select one and it will take you to a donation form.  In the last box on the form titled: ADD A MESSAGE please include specific size(s) Men's/Women's/Youth S,M,L, XL, XXL.  Beneath that box please select "send only to owner"

I am donating for one type of donation/reward but want additional quantities of the same type. Example (3) Jab T Shirts. Follow all of the same steps above, plus edit/change the AMOUNT box to reflect your total (for example: 3 T Shirts x $35 = $105).

I am ordering a combination of shirt designs and/or a Youth Sponsorship, what do I do?  Follow the same steps above for “one type” and add a step. First, Edit/change the total in the AMOUNT box to reflect the complete donation, then in the last box called:  ADD A MESSAGE outline the breakdown of how you would like the amount/donation to be divided to the specific items.

I want to pick up my shirt (s) at the club. T shirts will be made available for pick up at the end of the campaign, stay tuned on Facebook and Instagram for details.

I cannot pick up at club and need my shirts mailed to me (within Canada).  Please edit the donation amount in your form by adding $10 to the order for postage/parcel of up to 4 shirts.  If larger quantity order please contact us directly in advance to determine shipping costs.

I live outside of Canada.  IN ADVANCE of donating please contact us via Facebook or email so that we can ensure shipping is available and determine the cost for you.