Mortimer is a Sphynx kitten with a cleft palate that we rescued in late Sept. 2020 Morty is ready to get his cleft palate repair surgery! He needs a major surgery that needs specialty care to thrive. 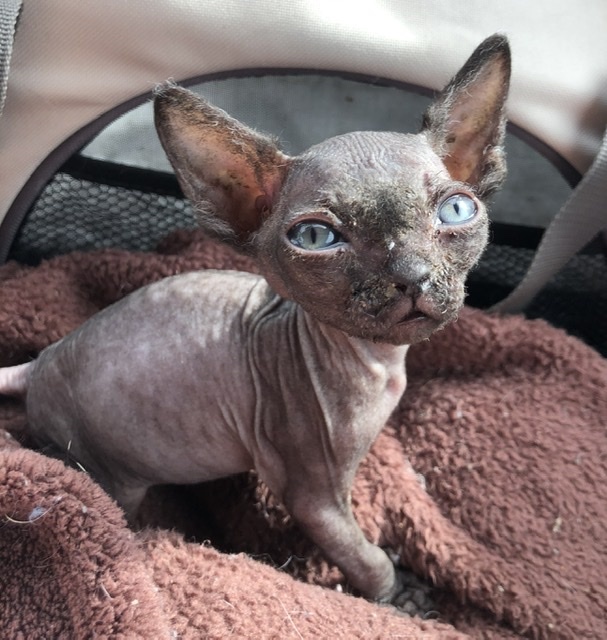 Mortimer is a Sphynx kitten with a major cleft palate that we rescued in late September 2020. He had a respiratory infection, and very emaciated, weighing only half a pound at 6 weeks old. We knew he was going to need a lot of time and care but he deserved to be given a fighting chance. The first few weeks were rough, as we tried to clear his respiratory infection and get him gaining weight consistently. Each day we weighed him and saw small improvements but not what we would hope to see in a young kitten. A kitten at his age should be gaining 1/2 -1 ounce a day! Morty’s upper respiratory infection caught up with him and he started to decline fast. We rushed him to the emergency vet where they told us he had next to no chances of survival and that even if he were to survive he could be deformed in other ways than his cleft palate. My partner and I were devastated, we had no idea what to do. The doctor offered hospitalizing him but explained that he would most likely still not make it. At that moment we knew that we were going to take him home with an antibiotic injection and some oral antibiotics and try to nurse him back to health but if he passed at least it would be with people who love him, in a familiar place. I took him home and wrapped him in my sweatshirt and sat in front of a space heater and sang to him. His temperature was reading at 92 F at the hospital so I knew I had to try to get him warm. He began to move in my sweatshirt as I felt him get warmer and I dropped a tiny amount of critical care liquid food in his mouth. His eyes grew from slits to wide almond shapes and he instantly became more alert. I knew at that point that he was going to survive this. He had the will to keep moving forward. He wanted to nourish his weak body.

We started feeding him by bottle because even with his cleft palate, he could suck like a vacuum! He loves to eat! So Morty gets a fully nutritional meal in a bottle three times a day! As the next weeks went on we retested his white blood cell count and it was back to normal! He was eating voraciously at every meal and week by week he gained more weight and he began to play and act like a kitten. Against all odds Mortimer was thriving and he is still thriving! He is ready to get his cleft palate repair so he can get by with significantly less boogers (cleft palates cause a ton of mucus issues!) and the ability to potentially eat solid food! Mortimer dreams of one day eating a steak!