Support Charis Carmichael Share
This campaign is unable to receive donations at this time.

We are fundraising for a donation to St. Paul's Lutheran School, New Ulm, MN in Jake's name. We got to know him there - our childhood classmate and friend who had a big laugh, big energy, and an even bigger heart. 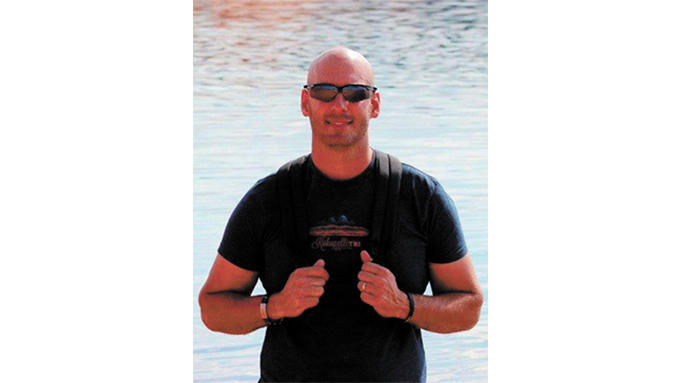 Jacob Landsteiner, 39, of Duluth, died peacefully Wednesday, January 2, 2019, at Solvay Hospice House after a long and courageous journey with brain cancer. He was born November 16, 1979, in New Ulm, MN, to Paul and Jeanette Landsteiner. He attended St. Olaf College where he excelled as an offensive lineman and graduated with honors in education. He was an energetic teacher and coach, and then became a military spouse and a "professional dad," a role he filled with a vivacious spirit. He changed diapers, made up songs, played catch, built forts, and waged epic Nerf wars with his 4 beloved children. He manned the house efficiently and joyfully during his wife's years of medical training and military deployments; he was a prodigious cook. He discovered a passion for cycling and became an impressive triathlete. In heaven, he plans to play a lot of golf and catch a lot of fish.

Jake had a charisma and authenticity that drew people to him, and he was generous beyond measure. Jake had a quiet but constant faith that carried him through his 5 years with glioblastoma and brought him and his family "peace at the last."

Jake is survived by his wife Dr. Pamela Landsteiner, his children Rachel, Benjamin, Abigail and Rebekah; his parents Paul and Jeanette of New Ulm, his brothers Josh (Delaney), and Jared, both of New Ulm; his sister Vanessa (Carlos) of San Jose, CA; his mother- and father-in-law Marsha and Robert Crall of Las Vegas, NV; his brother-in-law Dr. Timothy Crall of Mammoth Lakes, CA; and dozens of aunts, uncles, cousins, nieces and nephews.

Jake's joyful and magnanimous spirit will be desperately missed.

VISITATION: Saturday, January 12, 2019, from 11 AM until the 12 noon funeral service at First Lutheran Church.

If so desired, other memorials may also be directed to: Catch Your Moment Foundation (connecting families touched by cancer with the therapeutic sport of fishing), 7282 NE Birch Isle Rd, Duluth, MN 55803; or Camp Kesem at the University of Minnesota (a summer camp to support children through and beyond a parent's cancer); mail donations to Camp Kesem at 10586 West Pico Boulevard, #196, Los Angeles, CA, 90064, and indicate U of MN chapter, in memory of Jake Landsteiner.