We are a team of former NICU moms who are making beautiful gift bags to take to parents with infants in the newborn intensive care unit this Christmas.

One Kit of Love

Our kits of love include a beautiful swaddle, blanket, jewelry, chocolate, journal, nail kit and polish, moccasins, board book, nursery song CD, and other items to give the parents comfort. 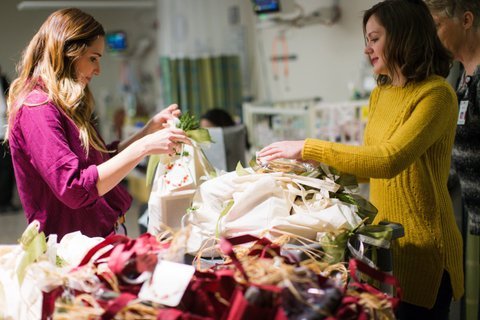 SIX YEARS AGO, longtime friends, Jess & Erin, were up late one night talking when suddenly they had an idea. The very next morning, "Kits of Love" was born, and within a few short weeks, over $3,000 had been raised, several media outlets had covered their story, dozens of local businesses had offered their services, and over 120 gift bags had been assembled for deserving NICU families.

Jess and Erin had the privilege of entering the sacred halls of the University of Utah Hospital, St. Mark's Hospital, and Primary Children’s Medical Center to deliver kits filled with warm socks, lotion, hand-written cards, baby swings, tiny diapers, magazines, gift cards, and best of all, messages of hope and encouragement. That day, Jess and Erin embraced a few of the parents who were spending their holidays in the hospital, and as gifts and tears were shared between parents who've been there and parents who were there, the sentiment that resounded loudest was, "you are not alone."

(To see some of the best moments from this day, scroll up and watch the video!)

The first time we embarked on this project, we started out with humble goals and anxious hearts but within just a few hours we were floored by the generosity of all of you who so kindly reached out to stand beside us. And thanks to you, together we were able to spread love so much further than we ever could have imagined.

Over the last six years our campaign has grown and we have been able to give over 1,000 kits of love to deserving families.  Kits of Love is also now a non-profit organization.

This year, we are so excited to be working with 5 women to help us expand these efforts and touch the hearts of even more families!

We are so proud to have the following women on our team! 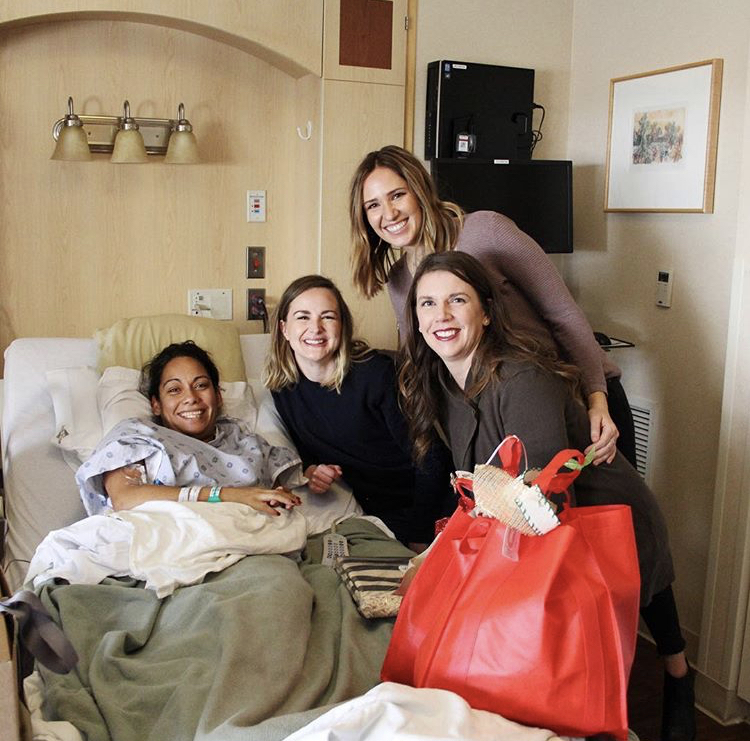 We are striving to raise $3,000 to fund these packages, and will also gladly accept any in-kind donations you would like to send our way. Please rest assured that every penny we receive will be used to fund another kit of love for a deserving family in need.

The support we have received since launching this campaign 6 years ago has been overwhelming. Thank you so much, from the bottom of our hearts. You can read more about WHY we're doing this below. 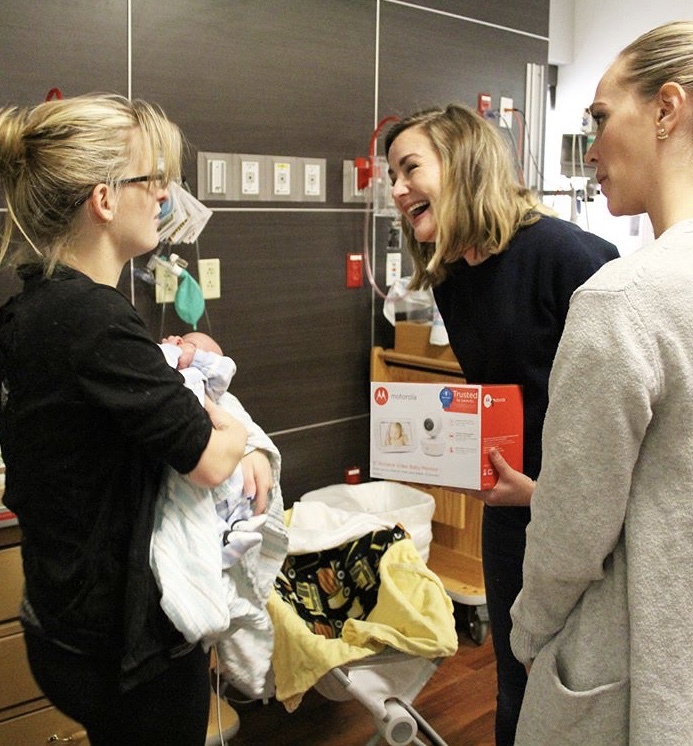 This Christmas season we have much to be grateful for. We are looking forward to everything that comes with the holiday season: decorating our trees and watching our children immediately re-decorate them, assembling gingerbread houses at annual family parties, watching The Christmas Story by the fire, and wrapping little presents in the late evening hours after our babies have gone to sleep.

Just a few years ago, Jess celebrated Christmas much differently. Instead of being home with her family, she was up at the University of Utah, in the Maternal/Newborn Care Unit, confined to a hospital bed. The pregnancy of her first child, Evie, was high-risk and required her whole body, mind and spirit to be fully focused on keeping her baby alive and growing inside of her. Jess spent 7 weeks up at that hospital, and she watched Christmas and New Years Day come and go in that lonely little hospital bed. Many nights were spent watching snow softly fall outside her windows, shifting from her left side to her right, and placing her hand firmly on her stomach, waiting for a reassuring kick.

It was a hard time, made more difficult by the holiday season looming outside of Jess' hospital room. Life seemed to pulse on for everyone else, but in her world, life had stopped altogether. She'll never forget that Christmas of 2010, and the never-ending ultrasounds, NST's, and IV's that punctuated her time there. Christmas is a time for miracles, and in the end, she got hers in the form of a beautiful 5lb 15oz baby girl she and her husband named Evie. She finally left the hospital on January 24, 2011, and shed many tears as she walked out of those doors and back toward her life.

Less than two years later, she found herself making that familiar drive toward the University of Utah hospital, where her second daughter, a newborn named Nora, was being treated at PCMC for a life-threatening condition called Necrotizing Enterocolitis (NEC). The hospital became her home, once again, this time as her newborn daughter fought for her recovery, and Jess watched helplessly at her bedside.

Christmas is a magical time for most of us, but it can also be a heartbreaking time for many families who find themselves in similar situations. This holiday season, we are asking you to remember those families who are spending Christmas inside the walls of the University of Utah Hospital, specifically those mothers who are facing life-threatening pregnancies, like Jess was, or those who are spending every waking moment at the bedside of a tiny loved one in the NICU, like Erin. 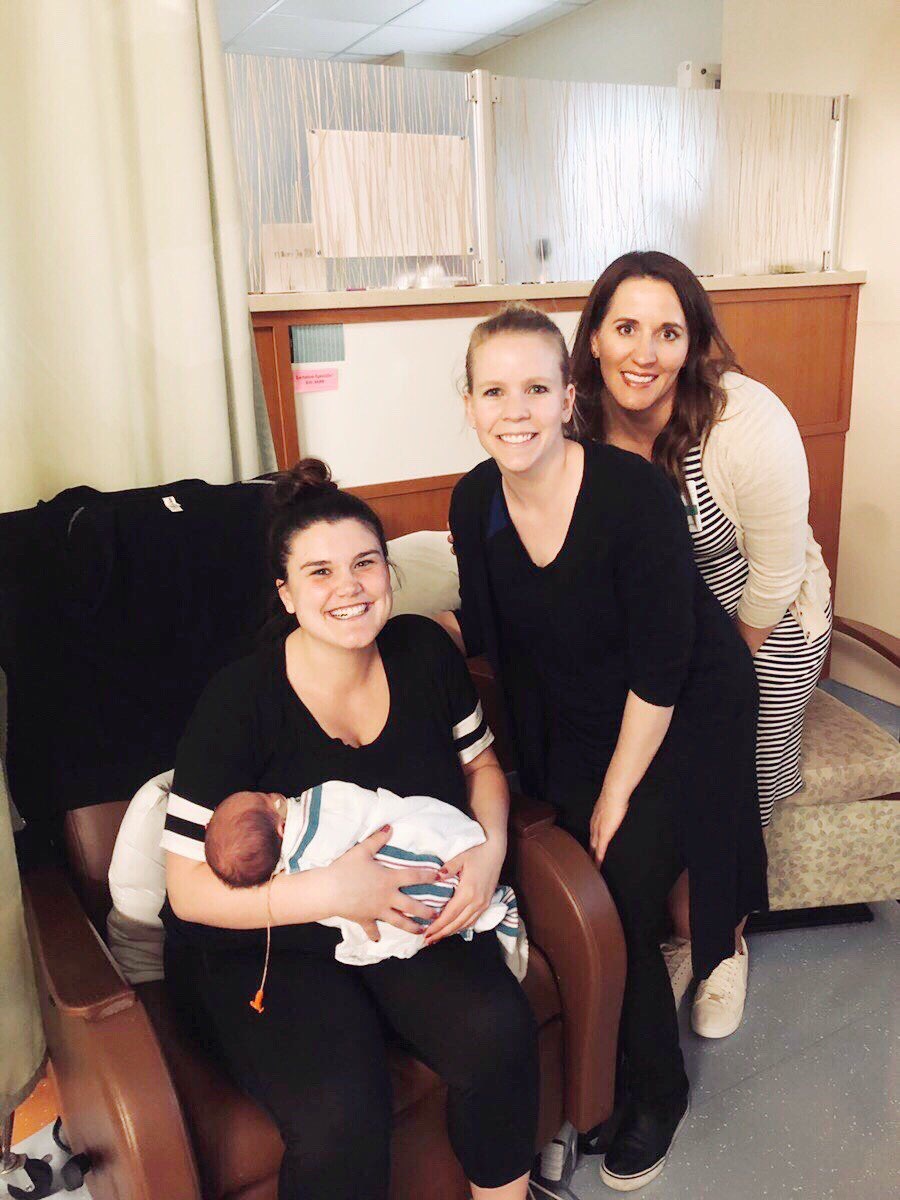 Erin and her husband are what the NICU nurses lovingly refer to as “repeat offenders” since two of their three boys were in the hospital. Henry, Erin’s oldest son, was born in fetal distress and spent four days in critical care.  Two years later, her second son Eddie decided to arrive 12 weeks early and spent 61days in the NICU.  Between the 65 days that she spent in the unit with her boys, she learned more than she ever wanted to know about living in the hospital and worrying about a sick baby.  Being a NICU mom means being forced to wait and from the minute that her boys were born, Erin waited for most of the special moments that all mothers and babies cherish.

After their births, Henry and Eddie were immediately passed into the NICU for emergency support and Erin was not able to see either of them until hours after they were born.  Erin waited for 4 long days to hold Henry for the first time and six days for the chance to hold Eddie close.  During those first scary hours when the condition of both boys was still uncertain, she waited for encouraging news in her hospital bed and desperately prayed for hope, help, and peace.  As the days progressed, she waited for test results and status reports in the hallways of hospital and in the unnaturally quiet walls of her home.  But mostly, Erin spent her days in the NICU by the beds of her children as she watched as they fought for their lives.

Tragically, Henry took his first and last breaths in the NICU and Erin is still waiting for the chance to be with him.  Two years after Henry’s death, Erin waited for Eddie to grow in the very NICU that her oldest son lived and died.  She winced with each blip and beep of Eddie’s monitors and she prayed that he could have a peaceful and full life.  She talked with his nurses each day and on the bad days, she cried and wished for a better life for her second son.  Thankfully, the day did come when Erin’s wait was over and she and her husband took Eddie home.  At 37 weeks gestation and exactly 5 lbs, he was just as impatient as his parents were, and he couldn’t wait any longer.

With so many babies born each day, there are some like our Evie, Nora, Henry, and Eddie, who will come under special circumstances and who need extra help.  By the grace of God, all babies will come into a loving home with good parents who will stay by their side and support them.  But even mom and dad need help now and then.  And during this season of giving, we ask you to remember the mothers. 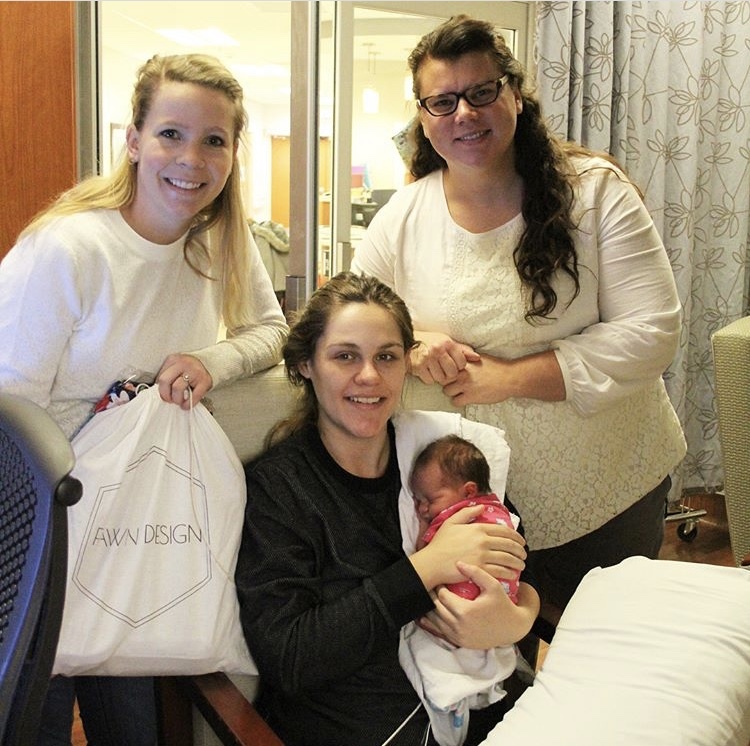 On December 13th & 15th, we will be delivering care packages to women in the Maternal/Newborn Care Unit and the NICU along the Wasatch front.  These packages will be filled with magazines, lip-gloss, nail polish, lotion, swaddles, jewelry, clothes, and encouraging cards and treats, which we hope will make a big difference to these exhausted and brave mothers who are living their lives in the hospital this Christmas. Sometimes, we all need something special to remind us we haven’t been forgotten, and to help us get through another day with hope in our hearts. With your help, we hope to provide that love and support to these special mothers in need.

We know that there are many worthwhile charities and causes that are deserving of your help.  But we also know that even the smallest donation to us will make a big difference to a mother who is tired because she has spent two months in the NICU with her baby who was born at 23 weeks.  Or to another mother who has been on bed rest in the hospital for a month and is fighting each day to keep her baby.

This is a non-profit organization that is fully operated and managed by us, please rest assured that the money that you donate or each cookie that you bake will go to a deserving mother in need. We would be so humbled by any offering you can give us, whether you donate your time, money, or talents, we would be thrilled to have your help. 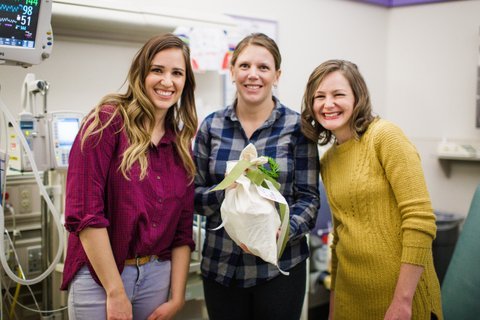