The money to to cover legal fees by activist known as Jesse Sauve aka Jesse Right, who is being prosecuted for trying to ward off an attack at an event last February by a violent mob.

Jesse Sauve was arrested as we exited Chicano Park surrounded by an angry crowd of militant chicanos, antifa anarchists and neo-Marxists.  He was using an elongated stun gun / flashlight to ward off the angry crowd without threatening anyone specifically.  Because the stun gun was long, the police arrested him for carrying a billy club, even though he had no intent to use the device as that and that it did not fit the legal definition.  He was told by the seller that it was legal.  The length of the stun guy allowed him to defend himself from a greater distance.  The definition of a billy is pretty vague and any long object can be classified as a billy if you plan to use it that way, but that was not the case in this incident.  See video of the exit above.

On February 3, 2018 about 70 pro-Americans went to a radical, municipal park to fly the American flag and display the national colors.  The event, organized by the Bordertown Patriots, was called a "Patriot Picnic". Chicano Park in San Diego is a no-go zone for openly patriotic Americans.  It is a La Raza nationalist park, where only the La Raza and Aztlan flags are allowed to be flown in a superior position.   A proud American flying the flag is very likely to be attacked in this public park.

They hold this taxpayer-funded park to be the first part of their Chicano national territory  to be occupied, called "Aztlan".  By means of a slander campaign against us, the militants incited 600 angry people to show up to block our way to the center of the park and the main flagstaff where some of them claimed we would raise a Nazi flag, when they knew full-well we planned to fly the American flag.

The 50-60 police present confined the patriots to a free speech zone, but when we left, a large mob waited for us outside, some of whom followed us for a mile.  A policeman had been beaten and seriously injured by one of the persons outside.  His nose and cheek bones were broken and a pool of his blood was on the sidewalk of our exit street. 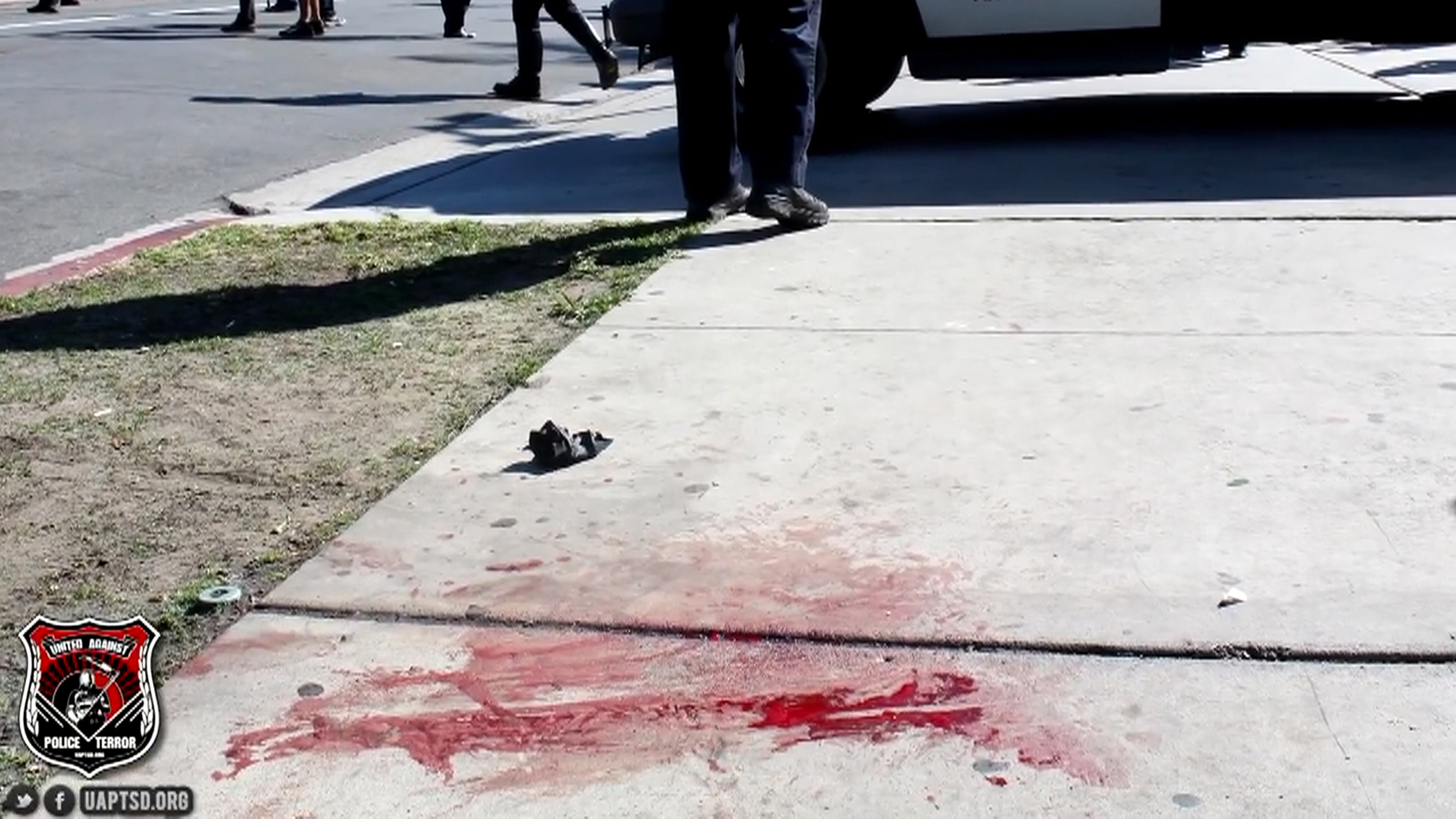 The mob was growing.  The officer-in-charge told us the the police  were leaving, because he feared for the safety of his own officers and that, if we wanted protection from the mob, we would have to leave with them. 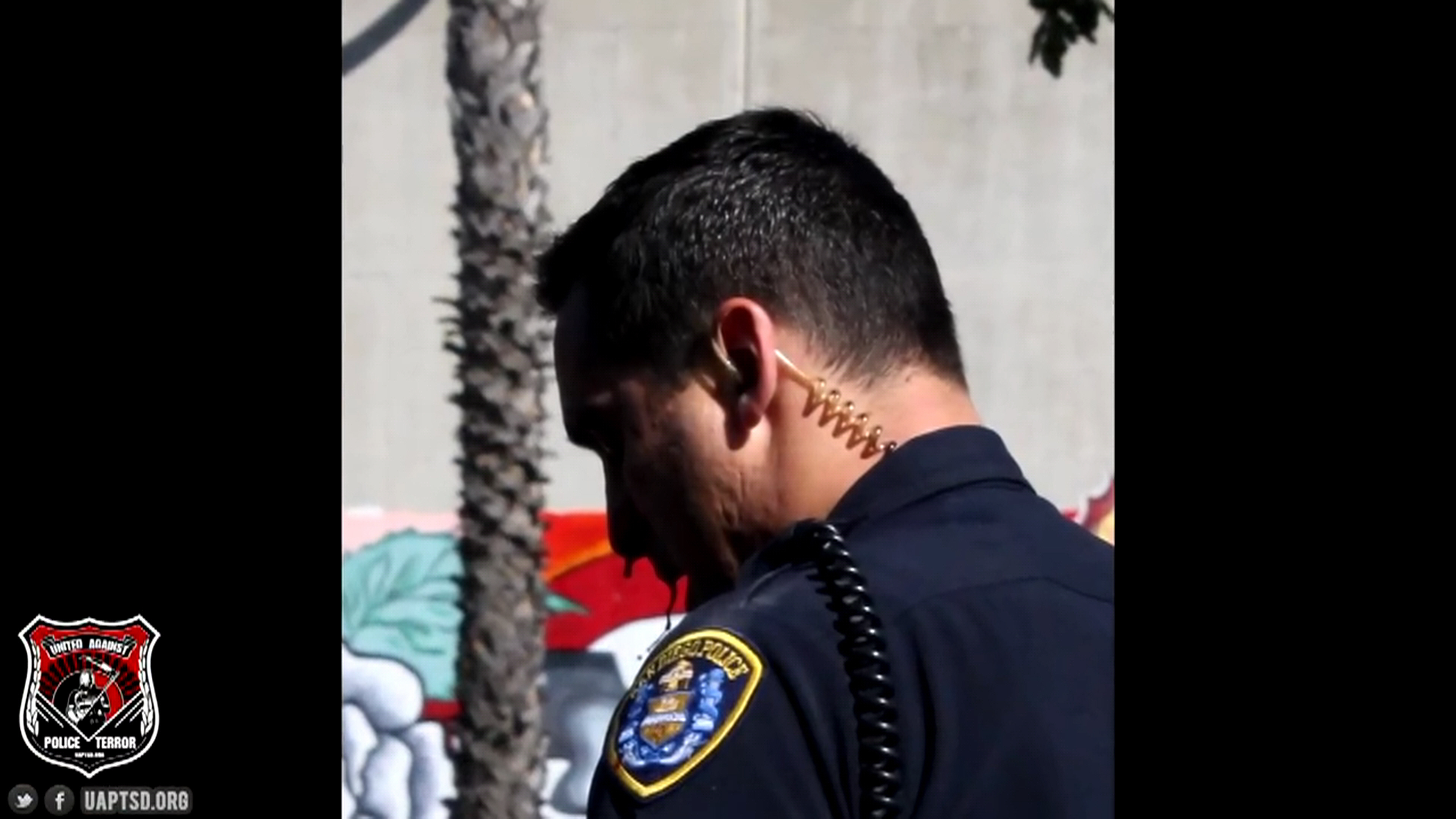 Jesse was using an elongated flashlight/stun gun to ward off attacks by the threatening mob, which he had purchased legally.  Such devices are sold by local stores such as Walmart and Best Buy.  It is just as illegal to sell a "billy" as to possess one.  So, why is only Jesse being prosecuted and not the sellers of such devices at local stores?  Selective prosecution?  He did not threaten  anyone with it as a club, he was just letting those in the area know that he had a stun gun.

They initially charged Jesse with a felony.  He refused to plead guilty and they eventually reduced the charge to a misdemeanor, anyway, even though he did not accept a plea, because they were overcharging him just intimidate him and get a plea.

You can hear him flashing the stun gun in the video below to ward off  attackers.  He is arrested at 3:10 in the video at the top of this page.

Jesse is being prosecuted by a vindictive, "progressive" city attorney, Mara Elliott, in a statement released to the media, called those citizens a "hate group", who wanted only to freely access this municipal park, discuss the anti-American murals there and fly the American flag.  Mara Elliott prosecutes pro-Americans to the max and lets leftists off the hook whenever she can.

There had been earlier a defamation campaign by the La Raza nationalist park supporters and their radical, anarchist, progressive and neo-Marxist allies to slandered us as white supremacists, Nazis and fascists.  Jesse is actually Latino and proud of his Mexican origins, not a white supremacist at all as our City Attorney would like to have the public believe.

There are second amendment aspects to this case, also, because the 2nd amendment does not say you have a right to keep and bear only firearms, but *any* arms, including swords and clubs. Jesse was using this device for self-defense. If you can't defend yourself, you give up your rights.  It's just as illegal in California to have a baseball bat for personal defense in your own home, though unlikely to be prosecuted.  They could, if they wanted.  Our rights were denied that day, due to intimidation via mob violence.

At taxpayer expense, Chicano Park in San Diego honors as heros communist dictator, Fidel Castro, and terrorist, Che Guevara and also a couple of the Chicano movement founders, such as Reies Tijerina, whose men actually shot law enforcement officers and killed one of them, and Rodolfo Gonzales, who justified the killing of law enforcement officials as a "revolutionary act". 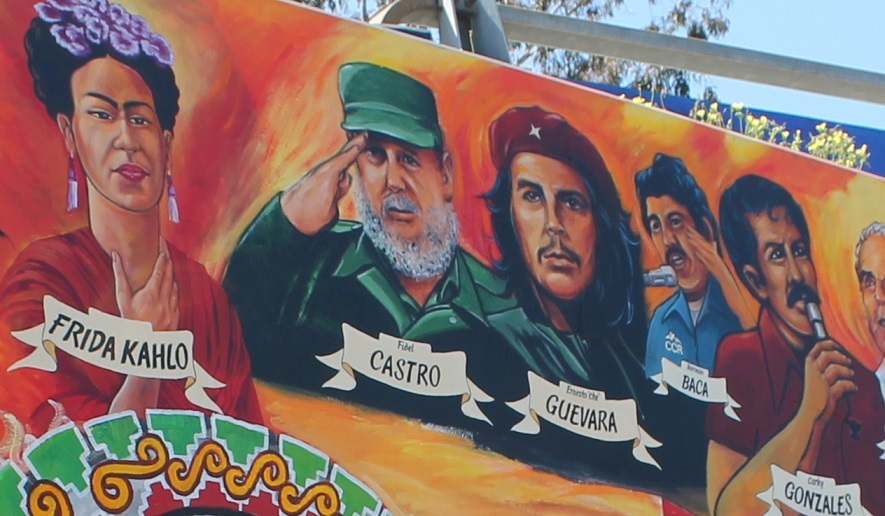 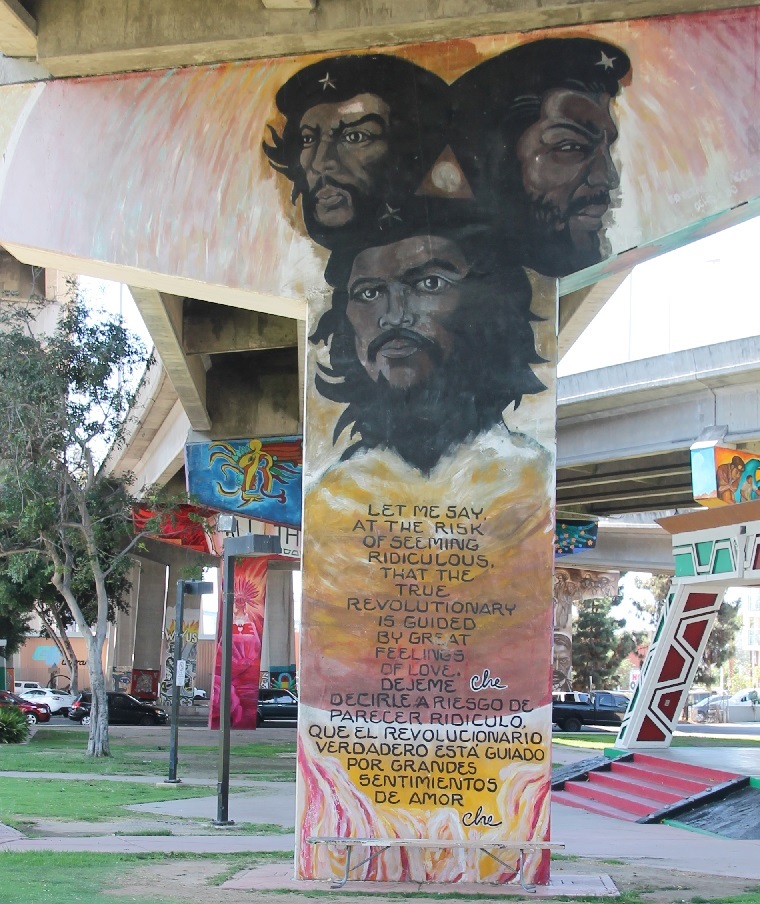 They also openly claim and support the idea that the southwestern United States is their national homeland, Aztlan, which they will control some day.  The park, which was occupied by Chicanos in 1970 is claimed as the first part of Aztlan to be taken.

This is why the Chicano Park Steering Committee is very adverse to the American flag been flown more prominently than the flags symbolizing La Raza and Aztlan.  They require the American flag to be, at best, inferior in the park, if allowed to fly at all.  You can expect to be harassed and attacked there, if you fly the flag freely without kowtowing first to the local Chicano gang who runs the part by threats and intimidation, called the Chicano Park Steering Committee.

Flags at Chicano Park, which symbolize La Raza and Aztlan and resemble the Mexican flag. 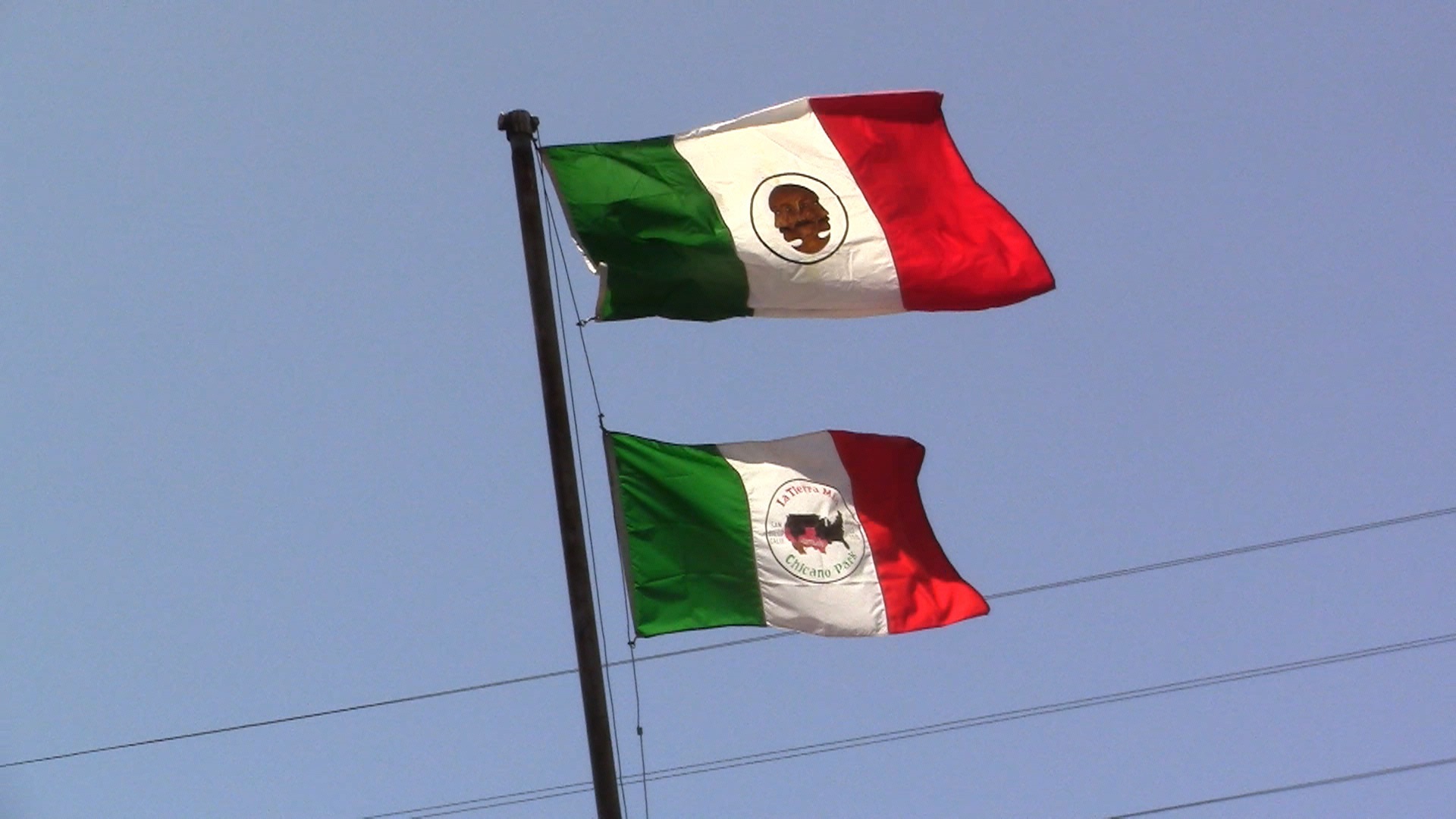 Just before this (second) Patriot Picnic, publicly embarrassed that we publicized that the American flag was normally banned there, they started allowing the Hispanic vets to fly a flag in a remote corner of the park, but not in the main, center area of the park or on the higher flagpole there.  It is required to remain inferior to their La Raza and Aztlan flags.