Bolts4Cuba provides bolts, drills, and hardware to replace unsafe anchors and create new routes in Cuba. We provide only titanium bolts with an expected 50-year lifetime to break the cycle of re-bolting unsafe routes ...

One of the original bolts placed on Mileno before replacement.
(We apologize for multiple updates, but hard to show entire story on this limited platform.)

Thanks to our donors and many volunteers, Bolts4Cuba is a continuing success. We’ve provided hundreds of bolts, plus power drills and the other hardware essential for anchor replacement and new route development.

Cuba’s biggest wall at La Costanera and the site of the earliest and bulk of bolt failures has been largely rebolted with titanium glue-ins. A new wall developed in 2019 with over 30 routes near the beach town of Gibara in eastern Cuba was done entirely with titanium bolts. 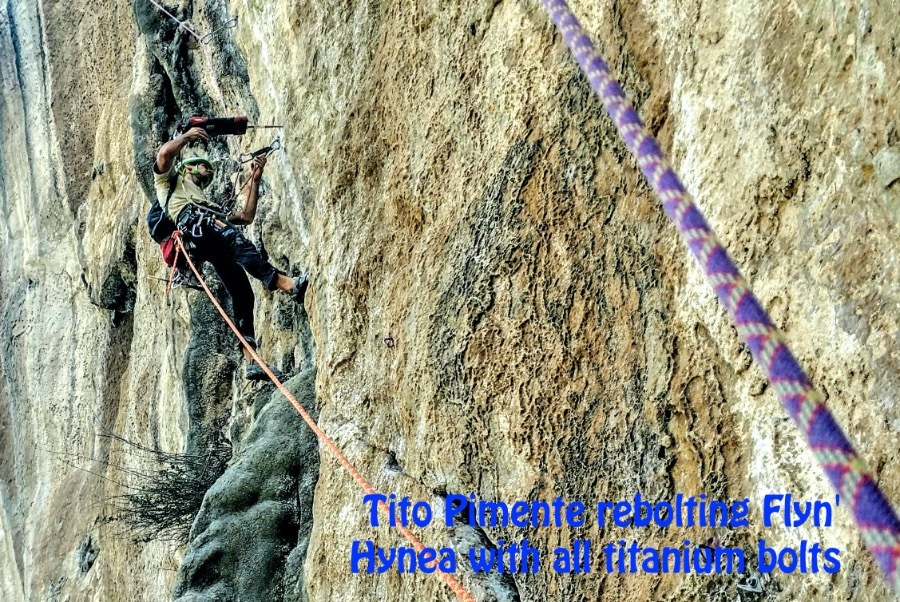 For our supporters who make this possible, the campaign has created thank-you rewards that can’t be purchased anywhere: topos to new climbing walls, from the heart of Viñales to beachside crags near Varadero and Gibara. Until future guidebooks are published, these topos will be the only information on those crags and routes.

Much remains to be done. Our goal is to end the pattern seat-of-pants bolting and rebolting that we as climbers continue to repeat. As we replace the thousands of steel expansion bolts, that will continue to deteriorate and fail, we have set as the standard for Cuba that all new areas will be bolted with only glue-in titanium bolts with an expected 50-year life. Whether 50 years or forever, current knowledge says that it is the highest sustainable standard one can set. 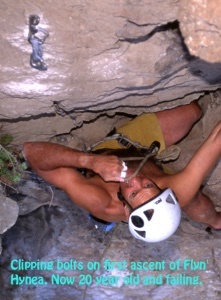 The spectacular Valle de Viñales is the center of climbing, with hundreds of routes, many multi-pitches of big wall sport climbing. Today however there are Cuban climbers and developed climbing areas across the entire island.

This rare feat has been accomplished in a country without any source of climbing equipment. None.

Cuba’s government alone imports all products available on the island, from food to tractors, and no climbing equipment reaches the island for sale, at any price. There is no recognition, support, even tolerance for activities such as climbing that the government hasn’t established and doesn’t control through its sport apparatus. Artist climber Renan Osturk has created a poignant short video on the daily life of a Cuban climber. 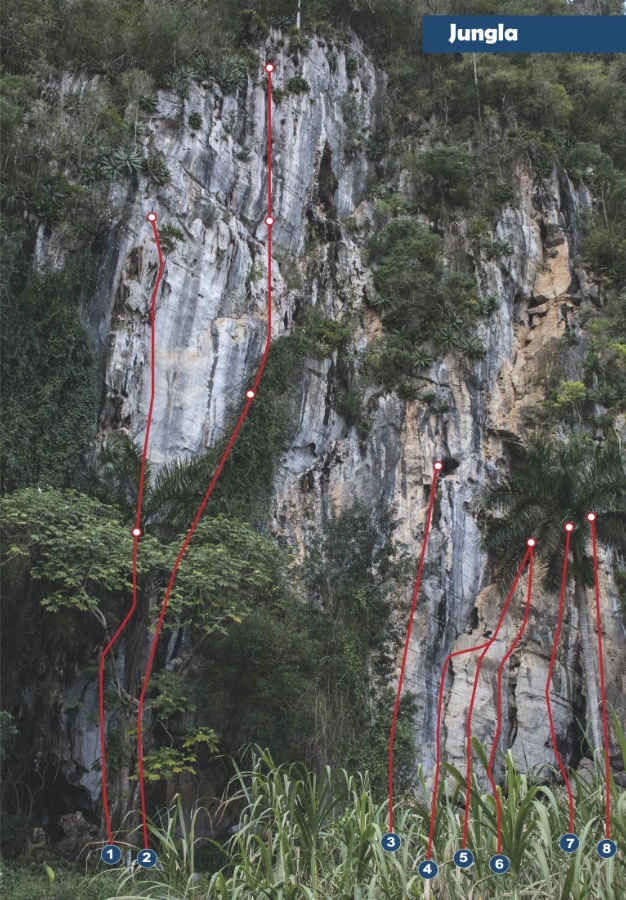 Climbing began in Cuba with visiting climbers leaving their gear. In time, others brought donated gear and bolts to sustain climbing growth across the island. An in-country network of distribution moved donations to where neophyte climbers were getting into climbing.

Harnesses, shoes, and ropes, however, without bolts and hardware don’t put up routes or develop more and newer climbing areas. The essential difference putting Cuba on the climbing map with the Cubans able to lead the way has this crowdfunding campaign.

Bolts4Cuba is a volunteer effort. Climber donations buy the equipment and climbers bring the the bolts and hardware to Cuba. Many volunteers, but no staff, no overhead. Every penny is put to work. 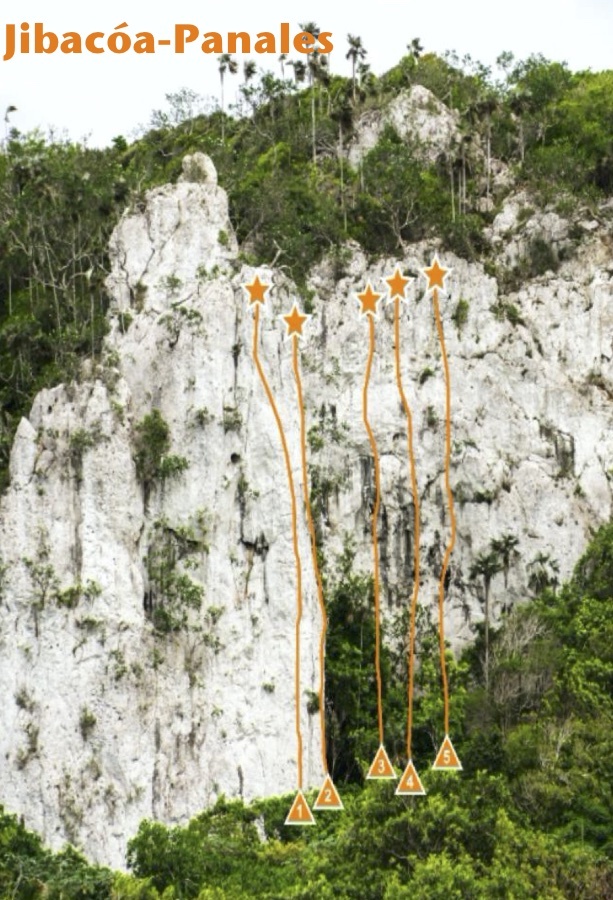 To volunteer to be a Bolts4Cuba, mula or mulo, as the Cubans call the folks who fly-in with all the goods necessary for life here. write to CubaClimbing.

It’s been 20 years since the first-generation of routes in Cuba. Many bolts were becoming unsafe. As anchor replacement progressed with bolts from Bolts4Cuba, we quickly noted that first ascentionist’s skimp-and-save philosophy lingered. New route development continued with steel expansion bolts. Re-bolting a route every 15 or 20 years would not cut it. 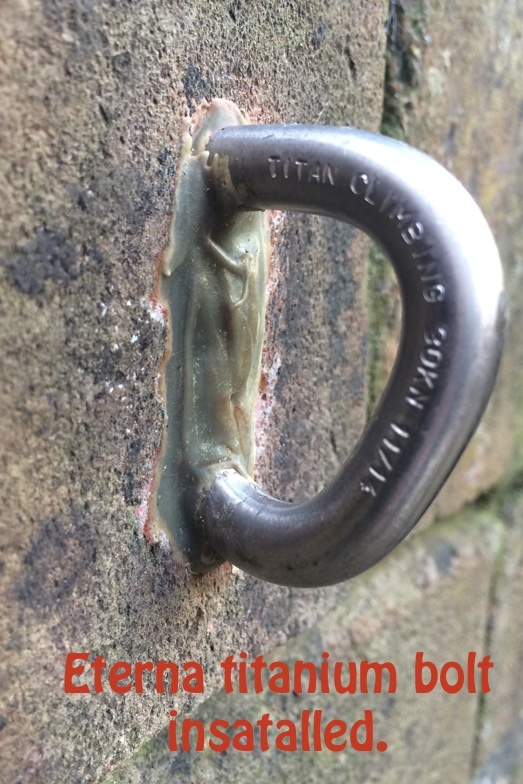 Understandably cost had been a  important criterion for choosing climbing anchors for Cuba’s first ascentionists who were paying out of their own pockets.

A community-funded re-bolting efforts such as Bolts4Cuba, however, could break the pattern. Anchors made from corrosion-resistant metals such as titanium cost more up front, but if they last many times longer than cheaper anchors, in 50 years the climbing community will have saved money—and a lot of re-bolting effort. 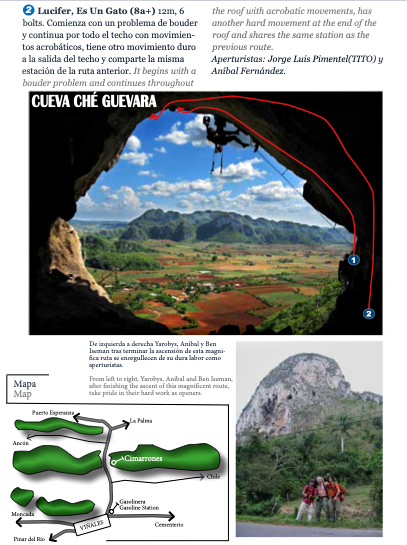 One of the original bolts placed on Mileno before replacement.
(We apologize for multiple updates, but hard to show entire story on this limited platform.)

On January 25 and 26 an older but really not meaner Aníbal and Yarobys Garcia rebolted the route with titanium bolts purchased by Bolts4Cuba.. (We apologize for multiple updates, but hard to show entire story on this limited platform.)

Mileno was an instant classic put up by Aníbal Fernández and Vity Echazábal 20 years ago, almost to the day. The first photo is of Aníbal and Vity on one of the early ascents in January 2000. Mileno launched this gold and red wall with its 2 and 3 pitch routes following striking natural features.

Mileno was an instant classic put up by Aníbal Fernández and Vity Echazábal 20 years ago, almost to the day. The first photo is of Aníbal and Vity on one of the early ascents in January 2000. Mileno launched this gold and red wall with its 2 and 3 pitch routes following striking natural features.

For a $100 donations, donors will also receive digital topos of a newly developed climbing area in Cuba. These routes are not in the Cuba Climbing guidebook. The topos are provided only to supporters of Bolts4Cuba. The area of Jibacóa is on the north coast of Cuba between Havana and Varadero. Jibacóa offers sport climbing by the beach, something that oddly enough, Cuba was missing.

Dear Contributors, Friends,
This year is almost over and a new climbing season is about to get kicked-off at the enchanting cliffs of Cuba. It feels good to know this season will be a little safer, a little more optimistic and inspired. It fills us with hope to know that despite all the chaos, political divisions and squabbles happening around us in the world, we were able to rally, reach across the borders and red tape and make a meaningful difference supporting what we love and believe in.
We @BoltsForCuba wanted to once again thank you for your generous donations and provide a report on our progress so far. Keeping in constant contact with climbers on the island, we worked carefully to purchase what was most needed. We were able to acquire and deliver the following equipment so far with more titanium bolts to be sent down soon!

Our efforts have been met with great appreciation and regard, and naturally, with ever increasing list of requests :)
We will keep-up this grass-root effort and will keep you informed, as much as we can, on new developments.
Please continue supporting us by spreading the word!
THANK YOU!
Scott, Armando and Olga @ BoltsForCuba

The Bosch drill and first party of new bolts has been delivered to Viñales couple weeks ago. Our friends are thrilled with the goods and send a big THANK YOU to all our generous contributors

Happy to report cuban climbers have started re-bolting with some titanium glue-ins they had at hand. But they were running short on resin, and here is our first courier Sharon passing the two cartriges of Hilti epoxy along with few mixing tips to Toni in Viñales.

Thanks to all our amazing supporters for generous contributions and great momentum! We have made our first purchases - Bosch drill and some Hilti Epoxy. These will be delivered to our friends in Cuba very shortly; we have number of volunteer couriers going over this month. Please let us know if you are planning a trip and willing to take along some donation gear.
Stay tuned for more updates and THANKS!